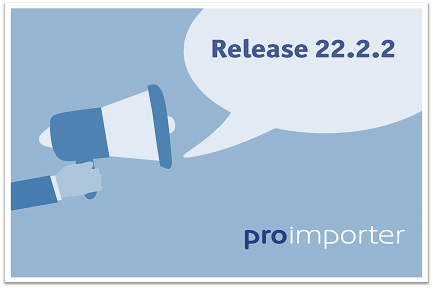 proimporter Patch for the web service interface change by Oracle

With the rollout of Oracle Primavera P6 cloud version 21.12, changes were made to the web service interface by Oracle. These fundamental changes to the update mechanism and the associated problems that occurred during the initial import with proimporter have been fixed in proimporter version 22.2.2.

Additional features were implemented in the interim release 22.2.2

Enhancement of the validation process:

You know the exchange of project schedules via xer or mpp files and the inconsistencies associated with it in Oracle Primavera P6? You want to avoid importing corrupt and irrelevant data into your database and reduce the effort of time-consuming cleanup after the import?

With the proimporter, we offer you a solution for fast, precise and secure xer and mpp imports into Oracle Primavera P6 databases - directly and without any detours!

The proimporter has a wide range of uses in various applications

Exchanging monthly schedule updates via xer and mpp files with customers and suppliers.

Exchange schedules from different service areas of a project in xer or mpp format and consolidate project data in Primavera P6.

Verification and individual mapping of data to be imported

User interface simplicity for intuitive use of the toll

Trouble-free transfer of data during reorganization or tool-rollout

Function implemented in the tool
Function in planning