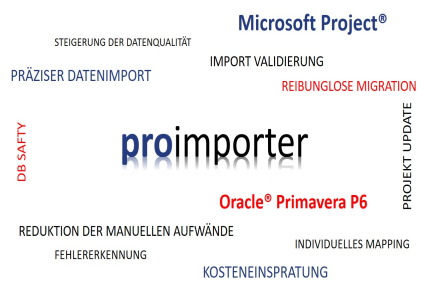 As early as July 2019, we reported on the Quick Fix function (https://www.proimporter.de/en/artikel/quick-fixes) that the proimporter offers. XER and MSP files can contain data elements that can cause various problems when imported into the Oracle® Primavera P6 database.

For example, IDs that are too long, the import of unused global data, the overwriting of global calendars, too many baselines to import, as well as the different logics when importing Microsoft Project® files into Oracle® Primavera P6.

In order to be able to detect and correct such issues without much manual effort, the proimporter offers a validation module with Quick Fix functions.
As we are constantly developing our proimporter further, the scope of the Quick Fix function is also expanding.
For example, a standard import with Oracle® Primavera P6 also imports project, activity and resource IDs whose character length exceeds the maximum value set in the P6 configuration. This violates the conventions of the respective company and leads to inconsistencies in your P6 EPPM database.

In contrast, the proimporter does not use the P6 standard import functionality but uses the connection via the P6 API for this purpose. In contrast to the standard XER import, it is therefore possible to avoid inconsistencies. The proimporter intervenes with its QuickFix functionality and supports the user in advance with a validation function to avoid error messages during import.
The proimporter gives the user the opportunity to manually edit the ID according to his own company standard before shortening it. If this is not desired, the proimporter shortens the last superfluous characters using the QuickFix and adds a suffix. This guarantees that the IDs remain unique and unambiguous
In the following chapters, we will go deeper into the topic and explain the Quick Fix functions in more detail.

Check for the length of the ID

The proimporter checks the ID fields for their character length and with the Quick Fix function offers the solution to shorten the ID / code to an allowed length and add a suffix for better recognizability.
The following IDs will be checked:

The following name fields are checked for character length:

Review of the elements for any possible duplication

The proimporter checks whether certain elements to be imported from the XER or MSP file already exist in the P6 database.
The following Quick Fix functions are available, depending on the respective application case:

Selection of EPS-nodes
A project can only be imported into the P6 database if an EPS node is specified. If no EPS node was selected for the import, the proimporter prevents the import and points out the problem.

Certain objects must be unique in Oracle® Primavera P6. A XER file import into Oracle® Primavera P6 can lead to double entries in the database - for example, for Projects (Project ID), Roles (Role ID), Resources (Resource ID) or Global Calendars - which in turn leads to a considerable amount of additional manual effort in the data cleansing process. The Oracle® Primavera P6 has no control function for this.
The proimporter compares the objects contained in the XER or MSP file with the P6 database and thus checks their uniqueness. If a certain field already exists with the same value in the P6 database, a solution is offered:

The standard import of resource calendars also imports calendars from a XER file that are not assigned to a resource. Thus, databases are often overloaded with unused calendars. The proimporter indicates when a calendar is not used by a resource and lets the user decide whether the calendar should be imported.

The proimporter checks elements contained in the imported file for the depth of their hierarchical structure and compares them with the settings of your P6 configuration.

If some of the listed elements contain a non-permitted structure depth in the new database, suitable solutions are offered. For example, the user can assign a higher level to the affected structure elements and thus ensure that the database consistency is maintained by the import.

During the import by proimporter the milestones from MSP files are verified according to the constraints. If a start milestone has a Finish on or Finish as late as possible constraint, it can be converted into an end milestone by the Quick Fix function to maintain the logic behind it.

In Microsoft Project®, a Hammock Activity (Level of Effort) can contain additional, conventional links (predecessor and successor relationships) in addition to the linked start and end dates. For Oracle® Primavera P6 logic this is technically wrong, because the hammock activity should only be driven by the linked start and end dates.
With a standard import this is not considered by Oracle® Primavera P6 and all links are imported. In addition, the standard import can no longer recognize that this is a Level of Effort. As a result, the results of scheduling the schedule are unpredictable.
The proimporter validates if there are further links - besides the linked start and end date - the conventional links are deleted, and the linked data are converted in a predecessor and a successor relationship.

The proimporter checks different objects in the importing XER or MSP file for their existence in the database.
The User can choose between different options: